How To: Tell If You’re Just Spiders 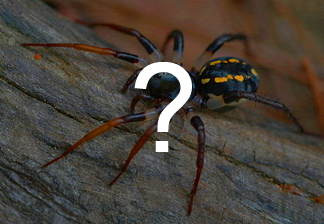 A common question that comes up is “How do I tell if I’m just a bunch of spiders?”

It’s a good question, because a surprising amount of people are actually just human-shaped husks full of malevolent spiders. An estimated 10% of the population are like this, so it’s in your best interest to find out if you’re one of them.

Here are a few ways to determine whether or not you are a spider-stuffed human-shaped piñata:

You may not have paid close attention to it because you’re just a bunch of dumb spiders, but what comes out when you bleed? Is it blood? Or do a bunch of spiders come swarming out of the wound? If it’s the latter, you’re probably made out of spiders. Either that or you have some terrifying disease and you need to stay away from me. Well, you need to stay way from me in either case.

This method is fairly reliable, but some people may not be willing to bleed blood just to make sure they’re not an arachnid abomination.

You may be wondering “what in the world does Microsoft know about spiders?” Well, that’s a good question. Microsoft has compiled a vast amount of data on things full of spiders ever since the release of the XBox One game console.

The console was often full of spiders, so the tech support down at Microsoft is well equipped in taking care of things that are full of spiders. They’ll quickly be able to figure out whether or not you’re made out of spiders.

WARNING: Microsoft tech support may be run by spiders! Do not give absolute trust!

Doctors have x-ray machines and MRI machines and things like that. I’m sure that if they use one of those fancy techno-machines on you, they’ll notice that  you’re just a writhing mass of spiders.

Or maybe they’ll just use the stethoscope and notice that instead of a heartbeat, they hear the horrifying sound of scuttling bugs.

The doctor should be well trained, as spider “people” aren’t particularly rare. Be careful, though, because many of the doctors are trained to eliminate spiders. You could end up submerged in a vat of acid or thrown into an incinerator if the doctor sees you as a threat. Consider letting it happen, though. Nobody likes spiders and you have nothing to contribute to the world if that’s what you are.

Hopefully these tips will help you figure out what exactly you are. I have no idea what you should do if you find out you actually are a bunch of spiders. Maybe self-immolation? I really hate spiders.

2 thoughts on “How To: Tell If You’re Just Spiders”