Tall pressures can sometimes make a big man small, but think again and maybe a man that can’t handle pressure ain’t no man at all. I was sittin’ around in the ZA offices the other day, passing time, when an opportunity the size of West Texas rolled into my grasp.

You see, due to some unforeseen and sudden consequence, I was granted a powerful ability. An awful heavy one. A few doors opened up and I was granted the option to purchase a Nintendo 3DSXL from e-commerce merchant Amazon, and when life runs a screen pass to blind the goalie, you take your damned shot.

This opportunity, harboring more gravity than all the black holes above and below us, wasn’t just important to my own career- a sneak peak at Nintendo’s new system? That could put me and all my Zesty Aroma literary brothers on the map. Yeah, I took that shot. Full slap shot down to the 5 slot. Now, did that puck ever meet net? Pour a drink and take your shoes off, this might take a while.

UPS man came round my front door about five and a half PM this evening. Just left the delivery, knocked, and left. I wish all people in the delivery business held such practice instead of hangin’ around all entitled expecting more. I suppose I digress.

Opened that box up, had a few boxes inside of them. One of which was the box that got me to this keyboard in the first place. 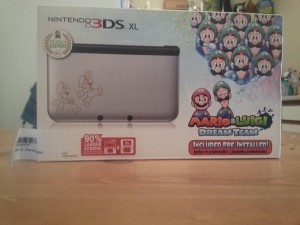 Other contents in the big box? Well, new dog toy was one of them, but my beagle destroyed it in five minutes. I suppose some people don’t take pride in their craft anymore. Well, the box was held closed by two tape tabs. I sliced them carefully with a knife. Now, the thing is, whenever you’re using a knife in such a matter (or any matter) it is paramount that you cut AWAY from your body- not towards your body, not ever, that could cause injury. My myself I got a few scars on my personal architecture owing their existence to such poor knifesmanship. You don’t want to end up like me. 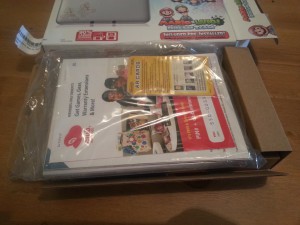 There was a small box inside the box holding stuff. Some sort of high-tech baseball cards, some pamphlets, a pin number for something. A manual, too. You know I bought a ps3 not too long ago and it didn’t even come with a manual. I’m glad Nintendo had such pride as to include one, even if it never sees use. I went ahead and put it on my bookshelf, under “N”, for Nintendo. 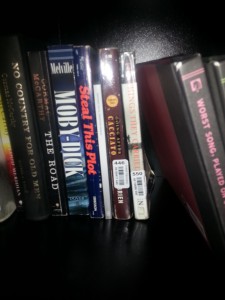 Fold that part back, and there’s the goods. Right there, that’s what you bought your ticket for. That’s what you showed up to see. You can calm down now, it’s all here. Delivered as promised. 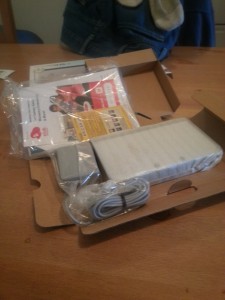 I couldn’t find the SD card at first. Turns out it’s actually in the system. Pretty clever. Same with the stylus. Alright. We’re all cool here. 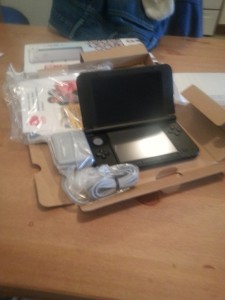 There’s the thing opened. Pretty good size, pretty good feel, feels good enough, you know. Not cheap. You see how big it is? Not huge or anything. You know Box? This thing is too big for Box’s little pussy hands. He had to downgrade back to a standard. Chuck told me. Though I suppose the tragedy of his anatomy is an opera for another time. Look at that, fits in my pocket just fine. Though it must be mentioned these are some loose khakis with decently large pockets. You might not have such success in your weekend stylish jeans. Maybe you will. Whatever.

Overall I’ll give this console a “Pretty Cool”, and leave the headroom there for a potential “Too Dope”. I ain’t played the thing yet it’s charging in my room.