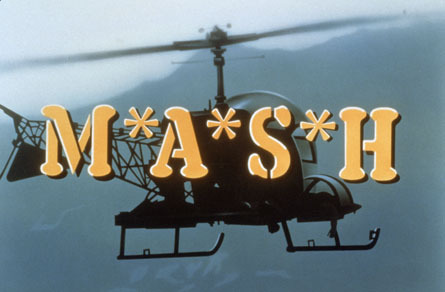 Welcome to Pilot Season, the, hopefully, recurring series where we take a look a various TV show pilots and see how they compare to the rest of the series. Today we’re going to cover one of the greatest sitcoms of all time, MASH.

I’ve seen bits and pieces of the pilot for MASH over the years but I never sat and watched the whole thing, it really is an odd little episode. I wouldn’t call it a “mixed bag,” as it skews closer to “good” than “meh” but it is very different from what I remember of the show, which makes it a perfect first subject for this series.

The pilot starts out with a long intro that gives us glimpses of the characters and also segues into the opening credits. It creates an odd juxtaposition as the somber theme music plays and is immediately followed by Hawkeye, the wry, jovial leading man, narrating a letter written to his dad.

This is the closest the pilot gets to drama though, as most of the episode is focused on Hawkeye and his pal, Trapper John attempting to raise the tuition to send a Korean boy, Ho-Jon, to college by auctioning off a getaway with one of the nurses. Which brings me to the next point I noticed while watching.

This show is actually funny. This seems like an odd comment to make considering I called it one of the greatest sitcoms in the intro but I never remembered MASH as a terribly funny show. I remembered it’s incredible moments of drama and remembered that the comedy was there to set and lighten up those moments. This probably has to do with the fact that I’ve mainly watched the later years of this series, when the show became more dramatic. It’s clear from watching a couple other episodes that MASH sticks with the “absurdist comedy with moments of drama”  for most of it’s early run.

As for how the pilot sets up the premise and character of the show, the premise is right there from the start and it’s hard to miss the “these guys goof off to cope with the stress their job hands them every day” message by episode’s end. The characters, on the other hand, are a different story.

Hawkeye and Trapper John are well-served as is there nemesis, the fun-hating Frank Burns, but most of the other character feel a little undercooked. There’s commanding officer Henry Blake and his clerk Radar who both get moments but are usually outshined by the duo of Hawkeye and Trapper. There’s the priest, Father Mulcahy, who doesn’t even get a word in the entire script. Margret “Hotlips” Houlihan gets a very amusing flashback to how she got to know the general that she calls in to arrest Hawkeye and Trapper but is mainly just reduced to “the one who is sleeping with Frank.” Klinger, the cross-dressing orderly desperately trying to get sent home, doesn’t even show up.

Of course, none of this is uncommon for a pilot, at it’s best the pilot is the test run for the actual show, it’s what gets the series off the ground. MASH’s pilot may seem fairly different from the show it became but that’s not a bad thing. I have a hard time believing that MASH would have been nearly as successful if it started off with the heavy dramatics. It’s always easier to make us laugh and then make us cry.